The Government of Mali validates and endorses SEforALL Investment Prospectus 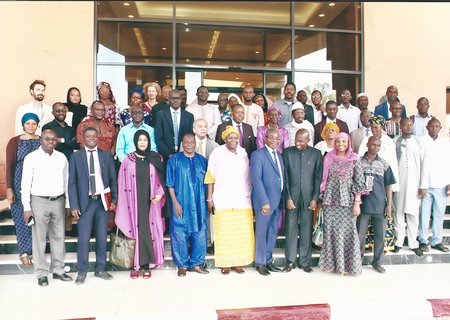 On May 14th, energy stakeholders from Mali gather at the Azalai Salam Hotel in Mali to witness the launch and jointly validate the SEforALL Investment Prospectus. The opening ceremony was marked by the intervention of the representative of the African Development Bank (AfDB), Mr Kangbidi NYAKI, and the address of the Secretary General of the Ministry of Energy and Water, Mr Moussa CISSE.

With the official endorsement of the SEforALL Investment Prospectus by the Secretary General of the Ministry of Energy and Water, Mr. CISSE, this ceremony is the culmination of a process that began in 2015.

In 2015, the Ministry of Energy and Water with support from ECREEE validated and published its SEforALL Action Agenda setting sector targets for the Country and outlining the priority actions required to achieve them. The national targets under the SEforALL framework are: (i) increasing the national electrification rate to 63% in 2020 and 87% in 2030; (ii) significantly increasing the proportion of the population with access to clean cooking equipment (including butane gas, solar cookers) to 444% in 2020 and 82% in 2030, and increasing the power produced by grid-connected solar photovoltaic (PV) plants to over 500 MW.

Starting in 2017, an Investment Prospectus (IP) was drawn up to operationalise the Action Agenda with support from the SEforALL Africa Hub – hosted by the African Development Bank (AfDB) – and with fund from the GEF-funded Africa Climate Technology and Finance Centre and Network (ACTFCN) – also hosted by AfDB. The IP specifies 5 distinct pipelines: (i) on-grid projects, (ii) off-grid projects, (iii) sustainable cooking bioenergy projects, (iv) energy efficiency projects; and (v) projects to strengthen the investment climate. 20 projects were selected according to well-defined criteria with financing needs estimated at €929.11 million, including €651.5 million for grid-connected projects, €208 million for off-grid projects, €10.11 million for bioenergy projects and €59.5 million for energy efficiency projects.

The validated IP can be downloaded here.