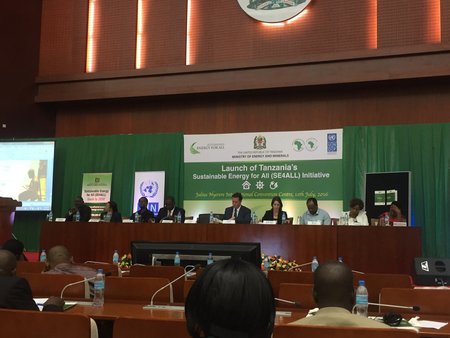 On 11 July 2016 in Dar-es-salaam, the Minister of Energy and Minerals of Tanzania, Prof. Sospeter Muhongo officially launched the Sustainable Energy for All (SEforALL) Action Agenda and Investment Prospectus for Tanzania in the presence of the UN Resident Coordinator for Tanzania, Alvaro Rodriguez, the EU Ambassador to Tanzania, Roeland Van De Geer, and the AfDB’s Resident Representative in Tanzania, Tonia Kandiero.

Organized by the Ministry of Energy and Minerals in collaboration with the UNDP, the workshop marked the official launch of the Tanzania SEforALL Action Agenda and Investment Prospectus. The Action Agenda was developed in an inclusive process bringing together key stakeholders from Government, development partners, private sector and civil society, setting Tanzania’s 2030 targets as far as access to electricity and clean cooking solutions, the share of renewables and the rate of improvement of energy efficiency are concerned, as well as the priority actions required to be implemented to achieve these objectives.

The African Development Bank with technical assistance financed via the African Climate Technology Centre (ACTC) and the United Nations Development Programme supported the development process of Action Agenda and Investment Prospectus in response to a request from the Government of Tanzania.

A roundtable discussion with key representatives of various Tanzanian organizations, including the Rural Energy Agency, the Tanzania Traditional Energy Development and Environment Organization, the Tanzania Renewable Energy Association, Power Africa, EU Delegation, DFID, WWF and the National Gender and Sustainable Energy Network discussed how to translate the agenda into action re-affirming their respective institution’s support to this endeavor.