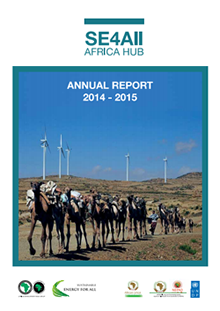 On October 13 in Abidjan,  the SEforALL Africa Hub launched its Annual Report for 2014-2015 (also in French), which outlines the progress made to date in helping the 44 partner countries create strategic frameworks necessary to mobilize investment for realizing their long-term energy goals aligned with the SEforALL Initiative objectives: ensuring universal access to modern energy services, doubling the global rate of improvement in energy efficiency and doubling the share of renewable energy in the global mix by 2030, as enshrined in  Sustainable Development Goal 7 adopted end  September 2015 in New York.

The Hub provides guidance to African governments and energy stakeholders, delivers technical assistance, fosters networking and communication, and contributes towards finance mobilization. A model of African leadership, the Hub has been at the forefront of SEforALL’s implementation, contributed to the shaping of the initiative globally, and set a standard for others to follow. In the foreword to the report, AfDB President Akinwumi Adesina, highlights the important role of the SEforALL Africa Hub “in forging the transformative partnerships needed to make access to energy for all a reality.” The Hub has also been tasked to play a lead role in the coordination of the implementation of the G20 Action Plan on Energy Access in Sub Saharan Africa adopted by G20 Energy Ministers on October 2, 2015 in Istanbul in collaboration with the SEforALL partnership.

Speaking about the report, SEforALL Africa Hub Coordinator Daniel-Alexander Schroth said, “The last year was a successful year with the Hub being able to assist many African countries in laying the fundamental ground for mobilizing investments, yet this is only a first step, as the focus now has to shift decisively towards implementation.”

Over the past year, the Hub has been providing direct technical assistance to more than 10 African countries in response to government requests, supported in most cases through the Pilot African Climate Technology and Finance Centre and Network. In addition, the Hub has supported the establishment of the West African Energy Leaders Group, which was launched successfully at the end of June 2015 in Abidjan. It also started the implementation of the Green Mini-Grid Market Development Program in cooperation with the Sustainable Energy Fund for Africa to scale-up the adoption of mini-grids as an important part of the solution to enhancing energy access in rural areas.

Moving ahead, the SEforALL Africa Hub will focus on mobilizing support towards the implementation of country action agendas and investment prospectuses and the strengthening of SEforALL focal points, communication and networking.