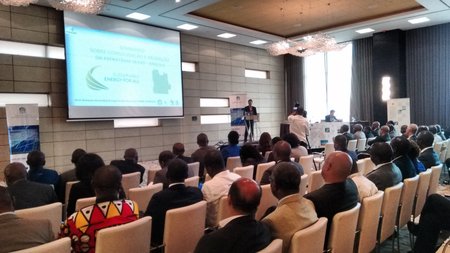 Angola’s Secretary of State of Energy, Mr. Joaquin Ventura, opened the validation workshop for Angola’s SEforALL Action Agenda and Investment Prospectus on 26 August 2016 in Luanda on behalf of the Minister Engº João Baptista Borges. The workshop, organised by the Ministry of Energy and Water (MINEA) concluded one year of work to define Angola’s long term objectives on energy access, energy efficiency and renewable energy, as well as the priority actions required to achieve them. It was attended by the Secretary of State for Petroleum, Mr. Aníbal Teixeira da Silva, the Resident Representative of the African Development Bank, Mr. Septime Martins, and more than 100 stakeholders from Government, private sector, development partners, civil society and academia.

In his opening address, Mr. Joaquin Ventura reaffirmed the importance of achieving universal access to modern energy services for the country and the strong commitment of the Angolan Government to this cause, highlighting the various policies and projects currently being developed. The Director of Electricity and SEforALL coordinator Engº. Job Vilinga, presented the methodology and approach used to compile the documents and thanked the coordinators of the different working groups for their support in this process.

The main aspects of the Action Agenda and of the Investment Prospectus were presented, including the objectives of achieving universal access to electricity and clean cooking by 2030. The Agenda also envisions improving energy efficiency by -1% every year and achieving a 85% of renewable energy share in the electricity mix. These objectives would be achieved through a series of priority actions – some of which have already started or are planned by the Government of Angola including the improvement of the transmission and distribution networks, investments in new generation plants, particularly large hydro, promotion of mini-grids and other renewables and expansion of LPG access for cooking.

After a fruitful discussion with the workshop participants, the Resident Representative of the African Development Bank in Angola, Mr. Martin Septime concluded the workshop, highlighting the importance of effective cooperation amongst stakeholders to bring modern energy services to all Angolans and reaffirming the support of AfDB noting that energy is a top priority for the AfDB with the New Deal on Energy for Africa.

The Action Agenda is an umbrella energy sector development document and constitutes a suitable national response to the Sustainable Development Goal (SDG) number 7 on energy adopted in September 2015 by the UN General Assembly that strives to “ensure access to affordable, reliable, sustainable and modern and energy for all”.

Following the overall guidance of the SEforALL Africa Hub, the Action Agenda and the Investment Prospectus were developed by inter-ministerial working groups through an inclusive process, with extended consultations with national stakeholders and international experts.

The African Development Bank supported the MINEA in this process with technical assistance financed via the African Climate Technology Centre (ACTC) upon a request from the Government of Angola. The work on the Action Agenda builds on the SEforALL Rapid Assessment / Gap Analysis that was launched in August 2015 with support of UNDP - both the Bank and UNDP together with the African Union and NEPAD are partners in the SEforALL Africa Hub.